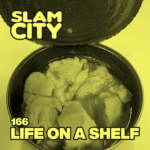 Slam City welcomes a new co-host to the show, Brian McFly AKA Soggy Ben. The episode opens with 13 MySpace Questions with Brian followed by odd news commentary, lunch, and learning.

Subway’s tuna does not contain tuna.

Why are some people in Japan paying big money for an old cassette tape?

Rice made out of soybeans is coming.

Burrito shares a Chucky story of his own.

Facebook apologizes for confusing a landmark name with an offensive term.

A teenager emerging from a 10-month coma has no knowledge of pandemic.

Hitler’s toilet seat looted by a US soldier during World War II up for auction.

Burrito recalls a memory about Back In Time by Huey Lewis and the News.

During the 2014 Groundhog Day festival, New York mayor Bill de Blasio dropped the Staten Island Zoo’s weather-predicting groundhog on its head, killing it — which was then covered up by zoo officials who claimed Staten Island Chuck had “died of natural causes”.

Graffiti artist Banksy sought to trademark his image of a protester throwing flowers. The trademark office denied it on the grounds of him having no interest in selling his work. In the ruling they used a quote from one of Banksy’s books: “copyright is for losers”.

The Beach Boys made it up. There is no place called Kokomo off the Florida Keys.