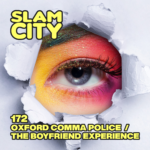 From tip to taint, this episode of Slam City covers the happenings of two former Blockbuster employees and two gentlemen/scholars, odd news, lunch, and learning new things. Recorded at the Daddy Juice Energy Studio in the Beaded Curtain District, your all-time favorite part-time friends bring you a triple uranium podcast designed to help you unwind.

The Last Blockbuster on Netflix.

Reminiscing about Blockbuster, the video rental store concept, and VHS.

Why in 2021 are people still able to take shitty photos of stuff they’re selling on the internet?

Is a 4th Wave of Ska inevitable? Another ska revival?

Recording No Face by The Suicide Machines on a Talkboy up to a TV speaker.

My Town by Buck-O-Nine.

Man stole a 400-pound slide from the playground, mounted it on a bunk bed.

Scientists want to send 6.7M sperm samples to the moon.

Life-size AND poseable Rei Ayanami Evangelion figure could be yours for a small fortune.

Woman says we should sit on the toilet backwards so you can eat at the same time.

Shaq poured milk on testicles after burning them with pain relief gel in a game.

DC warning letter about using comic characters in NFTs is being sold as an NFT.

The lack of an Oxford comma in the wording of a state law laying out what activities qualify a worker for overtime pay, more than 120 drivers for the Oakhurst Dairy became eligible for a multi-million settlement for unpaid overtime.

The average body temperature of a “healthy” human has actually dropped from 98.6 degrees to 97.5 degrees over the past 150 years.

Venus rotates backwards. So does Uranus.

McFly shares a story about bowling a 300.

Caesar said in Greek: ‘Kai su, teknon’ (which Shakespeare turned into the Latin ‘Et tu, Brute?’). It literally means ‘You too, child,’ but what Caesar may have intended by the words isn’t clear. The words ‘kai su’ often appear on curse tablets, and suggests that Caesar’s putative last words were not ‘the emotional parting declaration of a betrayed man to one he had treated like a son’ but more along the lines of ‘See you in hell, punk.’