Episode 185: Everyone Out of the Pool 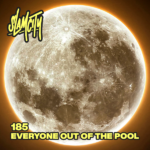 Slam City
Episode 185: Everyone Out of the Pool

The ska revival is here, but ska never really went away.

Faster and Furiouser? F9 marks 20 years since the first release.

Arthur the Arbiter: Five Percent Off

Eric America calls in: Snails are hermaphrodites. When they mate, they stab a spike into each other. Then their penises go into each other’s vaginas. Whoever placed the spike better has their sperm survive and the other becomes the mother snail.

Get to know your fearless and greasy hosts versus society.

Gemini Alpha Versus Brian’s The One That Got Away.

Songs that use breathing sounds – Tell Me Something Good.

A herd of cows stampedes through Los Angeles after breaking free from the slaughterhouse.

Lobsters get stoned for science and, shhh, a more humane way to boil them alive.

‘I was horrified’: Largo woman discovers $1B in her Chase bank account.

A Shinkansen driver was disciplined for taking a poop break while the train was going 150 kilometers an hour.

Japanese woman asks for advice on how to deal with the smell of son’s corpse and gets arrested.

Elderly zoo penguin with arthritis gets shoes to provide relief.

Web designer gives his baby boy bonkers name in homage to his profession.