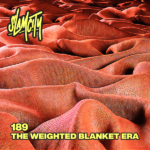 No other podcast with four dudes in a booth goes longer, faster, or harder than the World’s First Quantimino™ Powered Podcast. Bring a change of clothes.

Santa Claus is a kaiju.

Researchers explore employee perceptions of bullshit in the workplace with the “Organizational Bullshit Perception Scale”.

Arizona Woman Arrested For Using Craiglist To Find A Horse To Have Sex With.

‘I make jewellery from the teeth of dead loved ones to help people grieve’.

Wakefield kitten born without an anus saved in emergency operation.

(My Gato Needs An Assholo)

Robot Cockroach Features Engineering that Does Not Get Crushed, Moves Fast like the Insect.

Japanese sento bath house creates a genius system to show how busy the baths are.

New Silent Theater in Tokyo lets you lounge on couches with headphones while watching movies.

New Godzilla mobile game lets you raise your own Godzilla, race it against other monsters.

Which bottle of wine at a restaurant has the biggest markup? The answer may surprise you.

3 shot outside barber shop after argument between 2 men over who won a foot race a month ago.

Would You Eat This KFC Cheesy Zinger Triple Down?