Episode 190: Correlation Is Not Causation 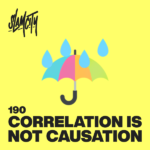 Ladies, gentlemen, and scholars! Your fearless and greasy hosts of The World’s First Quantimino™ Powered Podcast are back at the studio in the Compound to bring you the best conversation topics and odd news commentary curated over a week. The show closes with their original guessing game, What I Had For Lunch. This work of art would not have been possible without the support of Thicccum Farmz, The Crazy One, Julio Tejas, and you, the listener.

Ska revival. If you had to give someone their first impression of ska with one third wave ska song, which song?

From Tip to Taint: The Slam City Documentary.

The Etymology of Felching.

Man caught naked in a stable with a pony covered in massage oil denies wrongdoing.

Woman labels date ‘worst ever’ after man said she looked ‘fatter in person’.

Man’s proposal at a baseball game goes horribly wrong in a cringeworthy scene.

Two rare white orcas are spotted off the coast of Japan.

Olympic track and field athlete responds to cardboard beds in the Olympic Village.

Mother makes roadblock to force drivers to stop at her children’s lemonade stand.

Astronomers see the back of a black hole for the first time, proving Albert Einstein was right.