Episode 192: Whatever of the Year Every Year 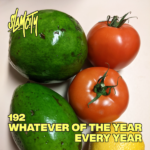 Slam City
Episode 192: Whatever of the Year Every Year

Join your part-time friends at the Thicccum Farmz Compound in the Beaded Curtain District for thought-provoking conversation, sing-alongs, odd news commentary, and What I Had For Lunch, The World’s First Quantimino Powered™ Guessing Game.

The Earth is a Big Turtle.

If you met someone that never heard music from the genre “emo” and you could only show them with one song by one artist, which song would that be?

Taking Back Sunday – “Cute Without The ‘E’ (Cut From the Team)”,

Wes Burrito drops off before the Saweetie Meal discussion.

Cutting Crew – “I Just Died In Your Arms”.

Hypothetical Meta-Analysis: Your friend’s dog swallows one of your AirPods Pro earbuds (retail $249/pair with charging case) because you left it in reach of the curious canine. Recover the ear bud or replace it ($89).

Woman’s terrible date goes viral after he starts flirting with a waitress.

Man has a nail removed from scrotum after shooting himself with a nail gun.

Starbucks releases 47 new Frappuccinos in Japan, one for every prefecture.

“Raw Pepsi,” the most refreshing flavor ever, is out in Japan, but how does it taste?

“Conbini warp” is an increasing traffic problem for businesses and authorities across Japan.

Best man was ordered to leave the wedding by the bride after a risky joke in speech backfires.

Pompeii’s fast food joint unearthed in 2019 opens to the public.

Aerosol cans cleaned up after a semi explosion in Big Cabin.