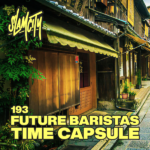 Serving you a hot cup of conversations about donuts, nu metal, odd news, and what they had for lunch, your fearless and greasy hosts bring you a show so hot that you’ll feel like the old lady who was scalded by McD’s coffee in the drive-thru. This is a unique collection of segments called Slam City.

Double X Quantiminü: If you met someone that never heard music from the genre “nu metal” and you could only show them with one song by one artist, which song would that be?

Brain picked “Youth of the Nation” by P.O.D.

Burrito picked “Freak on a Leash” by Korn.

Brian the Professional has mommy issues.

When you become a future barista, what would your signature drink on the specials menu be? Doesn’t have to be a coffee drink but it’s served at an indie coffee house where the cool kids congregate.

A British mom makes jewelry out of her own breast milk.

First ever ‘Taco Bell Defy’ to open in Minnesota.

Hermit crabs are sexually attracted to plastic pollution in the ocean.

Furious Twitter debate starts over how much meat people eat off chicken wings.

Bury your face in this Pokémon’s butt for the softest, soundest, and weirdest nap ever.

Beautiful cans of cake have become a viral hit in Japan.

A Supercomputer Just Calculated Pi to a Record 62.8 Trillion Digits. So What? — Popular Mechanics.