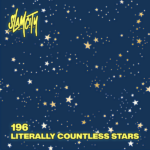 From tip to taint, Slam City covers the happenings of four dudes in a booth, odd news commentary, and food. Recorded at the Thicccum Farmz Compound in the Beaded Curtain District, your all-time favorite part-time friends bring you a triple uranium podcast that makes people laugh deep inside.

Misuse of the word “countless”.

Guy in a Coma.

Colombia Navy Seizes $60 Million Worth of Cocaine Found Inside a Semi-Submersible Vessel.

Dog The Bounty Hunter says he thought he had a pass to use the N-word “like Eminem”.

A giant Cinnamon Toast Crunch mascot at a Marlins game became nightmare fuel for so many MLB fans.

The Surprisingly Popular Chocolate Bars Made With Blood.

A South Korean university develops a toilet that converts poop to power and pays you for “deposits”.

Evangelion LCL ice cream is real and the new taste of summer in Japan.

Lawson Japan serves up carbs on carbs with their new French Fry Bread.

A man was arrested on suspicion of stealing more than 700 pieces of women’s underwear from coin laundromats.

Texas man caught trying to smuggle 350 lbs of meat across the border.

Lil Uzi Vert says fans ripped his $24 million diamond out of his forehead.