Episode 197: All My Friends Have Meaty… 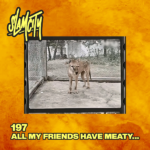 Slam City
Episode 197: All My Friends Have Meaty...

With your headphones on and pants tight, treat yourself to The World’s First Quantimino™ Powered Podcast recorded at the Thicccum Farmz Compound in the Beaded Curtain District with entertaining fellas that your mother warned you about. Bring a change of clothes.

If you met someone who has never heard of Weezer and could only pick one song, which Weezer song would you pick?

Arthur missed a 10% Off opportunity.

Brain got ripped off by a funeral home.

If you had to give up meat or cheese for the plant-based alternative, which one would you give up?

Rapper Dan Sur has gold chains surgically attached to his head instead of hair.

A Maryland man whose attack on a woman with a semen-filled syringe was caught on camera was sentenced to 10 years.

Lab-grown woolly mammoths could walk the Earth in six years if a geneticist’s new start-up succeeds.

The Great Wall of Vagina.