Episode 204: Sure to Make the Bodies Drop 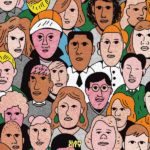 Slam City
Episode 204: Sure to Make the Bodies Drop

Your favorite part-time friends invite you to indulge in The World’s First Quantimino™ Powered Podcast packed with thought-provoking conversations sprinkled with ideas and jokes to get you through your day. Bring a change of clothes.

Arthur the Arbiter Versus Veganism

“I am become death.”

‘This why my packages always late’: Viral TikTok shows woman in the back of Amazon worker’s truck, sparking speculation

Japanese office disaster: man pees in drink bottle of woman coworker because “he liked her”

Could you eat 50 beef cutlet refill pieces? If so, this Japanese restaurant will let you eat for free

The McRib Is Back at McDonald’s. It’s Also an NFT