Episode 215: The Feeling That It’s All a Lot of Oysters but No Pearls 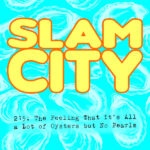 Slam City
Episode 215: The Feeling That It's All a Lot of Oysters but No Pearls

There’s reason to believe maybe this year is better than the last. It’s one more day up in the canyons, and it’s one more night in Slam City. If you think you might come to the Beaded Curtain District, we think you should. Yeeahhh!

How would your young adult self react if Gayle’s ABCDEFU was written about you?

Young Scandinavians Are Sticking Nicotine Pouches Up Their A$$es

Pensioner murdered with crossbow was ‘taken advantage of’ by ‘conman’

The top 30 foods that go best with white rice, according to Japanese netizens