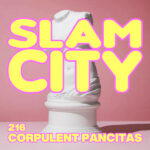 These are the sounds of four dudes in a booth, a British voice-over lady, and an Italian pop-punk band joining together at Daddy Juice Energy Studio and creating an episode of The World’s First Quantimino™ Powered Podcast. You’re cordially invited to hear possibly the best entertainment that you’ll have all week.

When We Were Young Festival

Logan Paul Paid $3.5 Million for Rare Pokémon Cards. They Might Be Fake.