Episode 218: Stay Wrecked & Jealous For This 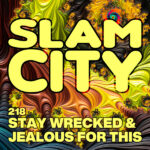 When everything you’ll get is everything that you’ve wanted. This all was only wishful thinking. You’re such a sucker for sweet talkers. You just need to keep us in mind as something larger than life.

Lion loses testicle after lionesses attack him for stealing their food

Man who allegedly stole $8,000 guitar by hiding it in his pants sought by police north of Toronto

‘I do it for free’: Prolific sperm donor gives his seed away using Facebook

Hyogo man arrested for stalking woman through her bank account

Why work from home when you can work from a Japanese cat town?