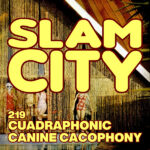 Somewhere in the Beaded Curtain District, four dogs barked into microphones and recorded a conversation heard across the Quantimino™. This episode captures that conversation that covered thought-provoking topics, odd news commentary, and what they had for lunch.

Pepsi Number Fever, also known as the 349 incident, was a promotion held by PepsiCo in the Philippines in 1992, which led to riots and the deaths of at least five people.

GMN: “Ask me how I spent my morning.”

“The Dog-a”: The Dog Saga continues

Boomers, how do you get over the inability to be the best version of yourself?

Man beaten with metal skillet after declining an offer of potatoes

40-person brawl breaks out at Golden Corral over steak

Free KFC taxis will be taking to the streets of Japan