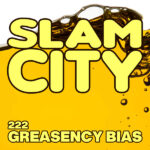 Join your part-time friends Gemini, Wes, Brian, and Arthur at the Daddy Juice Energy Studio in the Beaded Curtain District for thought-provoking conversation, sing-alongs, odd news commentary, and What I Had For Lunch, The World’s First Quantimino Powered™ Guessing Game.

Speaking of ultimate burgers, let’s talk about the Whopper.

In a world with overpriced fart jars and used bath water what do you think is the better business plan? The aforementioned or low priced impulse buy gacha merch

Burrito’s Nickelbox: Three bands with the word ‘three’ in their name