Episode 245: Allegory By The Slice 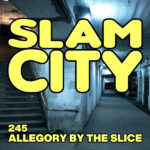 Gemini, Burrito, and Arthur take you on an almost hour-long conversation made up of observations, insight, realizations, odd news commentary, and what they had for lunch.

Minutiae Moment: Saving a dime on a gallon of gasoline ain’t worth the effort these days.

Ex-deputy accused of posing as wedding guest to steal gifts

Man arrested for opening door, walking on wing as jet taxis at O’Hare

Painting worth £740,000 ruined after ‘bored’ security guard draws eyes on it