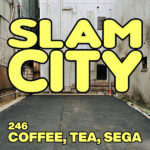 You’ve been kidnapped. The characters from the last TV show are coming to rescue you. Who is coming to save you?

ASIMO retires from performing after 22 years