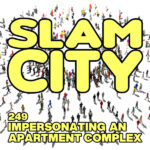 With your headphones on and pants tight, treat yourself to The World’s First Quantimino™ Powered Podcast recorded at the Daddy Juice Energy Studio in the Beaded Curtain District with entertaining fellas that your mother warned you about. Bring a change of clothes.

The Dog-a (Dog Saga) comes to an end soon. Will Brian choose (re)vengeance or forgiveness?

Blind fighters only at Street Fighter V e-sports tournament to be held in Tokyo, streamed online