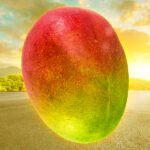 Brutally honest and humorous, just the show you’ve been looking forward to all week, every week. Intergalactic boba runners bring you conversations to get you through your existence.

White Van Scam Revisited – You’re in Slam City walking down the street in the beaded curtain district. You see a white van parked in a sketchy alleyway. What words are scrawled on the side that get you to walk over and take a look?

Guestimation Unknown – Art brings a trivial stat, then your star players guess how many.

CDC issues bizarre guidance for having sex with monkeypox

Working title: Mango on the Beach