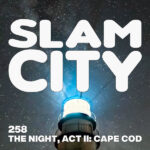 Gemini, Brian, and Arthur travel through the Quantimino to the Beaded Curtain District to record another intergalactic episode of Slam City. Bring a change of clothes.

Plug In & Hate – charitable foundations in their names

Alabama judge suspended after mocking Asian accent in the courtroom