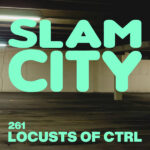 From tip to taint, Slam City covers the happenings of dudes in a booth, odd news, lunch, and learning new things. Recorded at Daddy Juice Energy Studio in the Beaded Curtain District, your all-time favorite part-time friends bring you a triple uranium podcast designed to help you unwind.

Hypothetical Meta Analysis: “Successful people without any malice will credit their success largely to their own hard work and ingenuity and therefore contribute less to maintaining the very circumstances that made that success possible in the first place.”

Arthur the Arbiter: Another Arthur places an online pickup order at Whataburger around the same time this Arthur does.

Miyazaki City mistakenly sends over 2M yen in meat to 140 people, instructs them to eat it anyway

Train conductor left behind by own train in Japanese countryside, proves he didn’t really need it