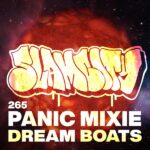 Is Jersey Mike’s sandwiches really “a sub above”?

Brian McFly is not a manic pixie dream boy boat.